The History of Pickleball

How it all started...

1965
After playing golf one Saturday during the summer, Joel Pritchard, congressman from Washington State and Bill Bell, successful businessman, returned to Pritchard’s home on Bainbridge Island, WA (near Seattle) to find their families sitting around with nothing to do. The property had an old badminton court so Pritchard and Bell looked for some badminton equipment and could not find a full set of rackets. They improvised and started playing with ping-pong paddles and a perforated plastic ball. At first they placed the net at badminton height of 60 inches and volleyed the ball over the net. As the weekend progressed, the players found that the ball bounced well on the asphalt surface and soon the net was lowered to 36 inches. The following weekend, Barney McCallum was introduced to the game at Pritchard’s home. Soon, the three men created rules, relying heavily on badminton. They kept in mind the original purpose, which was to provide a game that the whole family could play together.

1967
The first permanent pickleball court was constructed in the backyard of Joel Pritchard’s friend and neighbor, Bob O’Brian.

1972
A corporation was formed to protect the creation of this new sport. 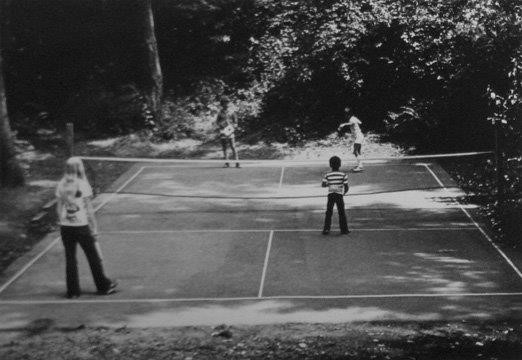 1975
The National Observer published an article about pickleball followed by a 1976 article in Tennis magazine about “America’s newest racquet sport.”